How do kids conceive the internet?

I wanted to understand how kids between 10 and 18 conceive the internet. Surely, we have seen a generation that we call “digital natives” grow up with the internet. Now, there is a younger generation who grows up with pervasive technology, such as smartphones, smart watches, virtual assistants and so on. And only a few of them have parents who work in IT or engineering…

Pervasive technology contributes to the idea that the internet is immaterial

With their search engine website design, Google has put in place an extremely simple and straightforward user interface. Since then, designers and psychologists have worked on making user interfaces more and more intuitive to use. The buzzwords are “usability” and “user experience design”. Besides this optimization of visual interfaces, haptic interfaces have evolved as well, specifically on smartphones and tablets where hand gestures have replaced more clumsy external haptic interfaces such as a mouse. And beyond interfaces, the devices themselves have become smaller and slicker. While in our generation many people have experienced opening a computer tower or a laptop to replace parts, with the side effect of seeing the parts the device is physically composed of, the new generation of end user devices makes this close to impossible, essentially transforming these devices into black boxes, and further contributing to the idea that the internet they are being used to access with would be something entirely intangible.

What do kids in 2022 really know about the internet?

So, what do kids of that generation really know about the internet, beyond purely using services they do not control? In order to find out, I decided to interview children between 10 and 18.

I conducted 5 interviews with kids aged 9, 10, 12, 15 and 17, two boys and three girls. Two live in rural Germany, one in a German urban area, and two live in the French capital.

I wrote the questions in a way to stimulate the interviewees to tell me a story each time. I also told them that the interview is not a test and that there are no wrong answers.

Except for the 9 year old, all interviewees possessed both, their own smartphone and their own laptop. All of them used the internet mostly for chatting, entertainment (video and music streaming, online games), social media (TikTok, Instagram, Youtube), and instant messaging.

Let me introduce you to their concepts of the internet. That was my first story telling question to them:

If aliens had landed on Earth and would ask you what the internet is, what would you explain to them?

The majority of respondents agreed in their replies that the internet is intangible – while still being a place where one “can do anything” and “everything”.

Before I tell you more about their detailed answers to the above question, let me show you how they visualize “their” internet.

If you had to make a drawing to explain to a person what the internet is, how would this drawing look like?

Each interviewee had some minutes to come up with a drawing. As you will see, that drawing corresponds to what the kids would want an alien to know about the internet and how they are using the internet themselves. 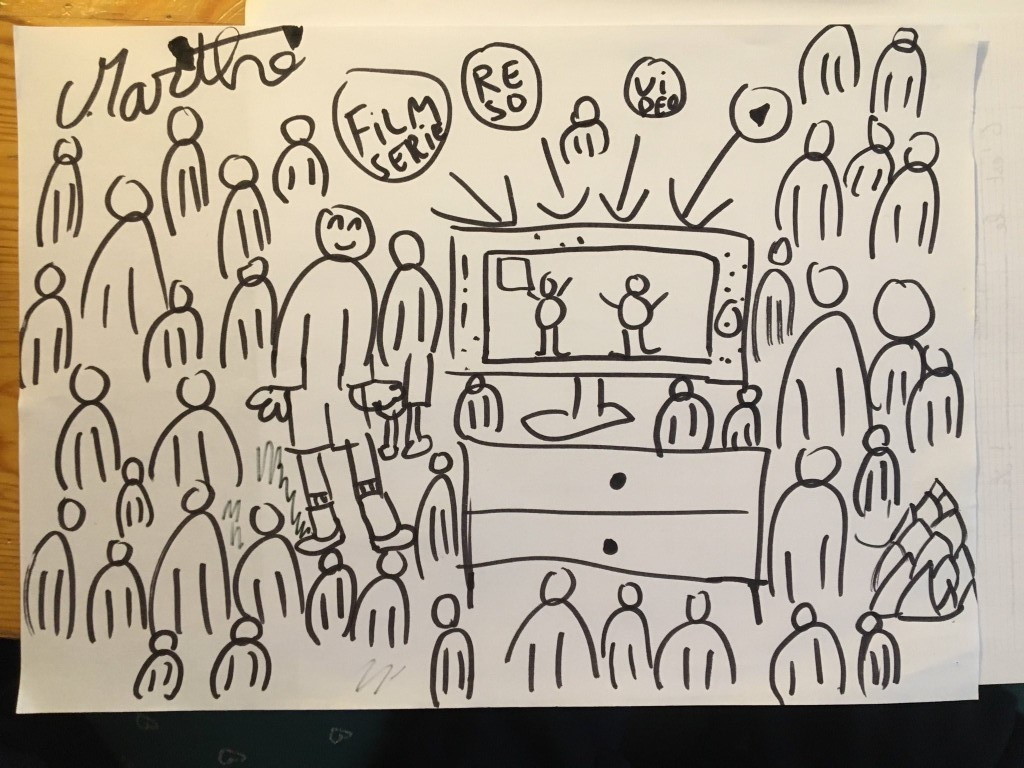 The youngest respondent, a 9 year old girl, drew a screen with lots of people around it and the words “film, series, network, video”, as well as a “play” icon. She said that she mostly uses the internet to watch movies. She was the only one who used a shared tablet and smartphone that belonged to her family, not to herself. And she would explain the net like this to an alien:

"Internet is a… er… one cannot touch it… it‘s an, er… [I propose the word ‚idea‘], yes it‘s an idea. Many people use it not necessarily to watch things, but also to read things or do other stuff." 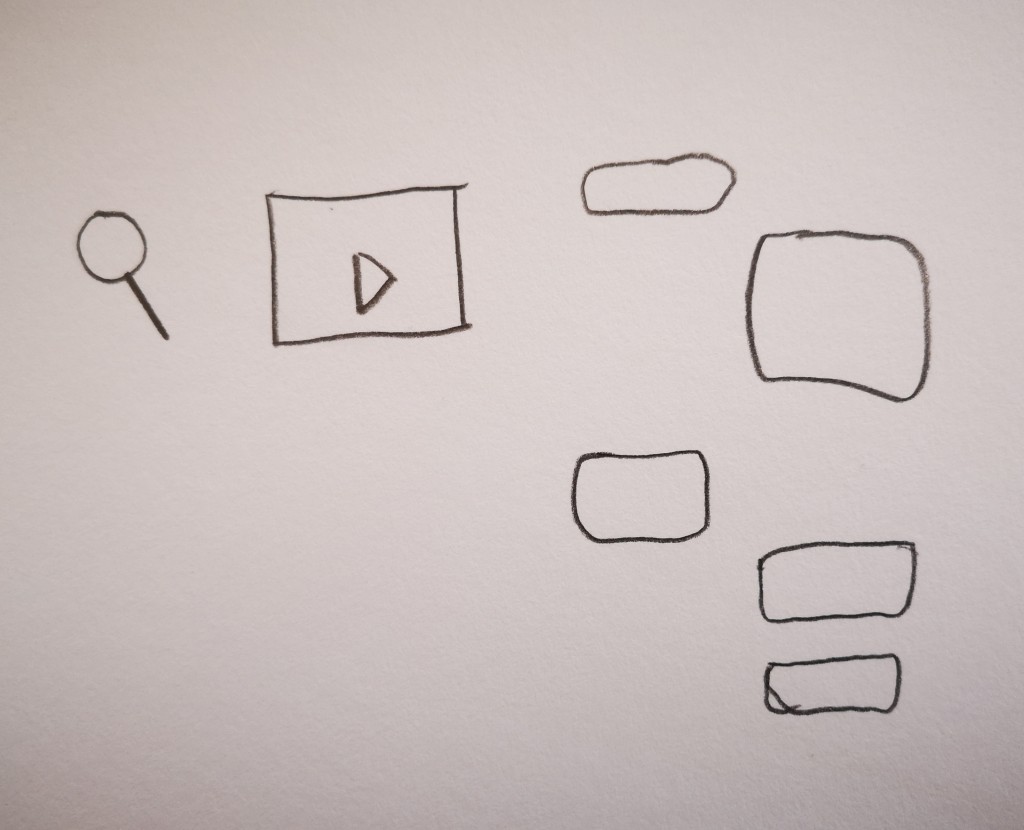 A 10 year old boy represented the internet by recalling user interface elements he sees every day in his drawing: a magnifying glass (search engine), a play icon (video streaming), speech bubbles (instant messaging). He would explain the internet like this to an alien:

"You can use the internet to learn things or get information, listen to music, watch movies, and chat with friends. You can do nearly anything with it." 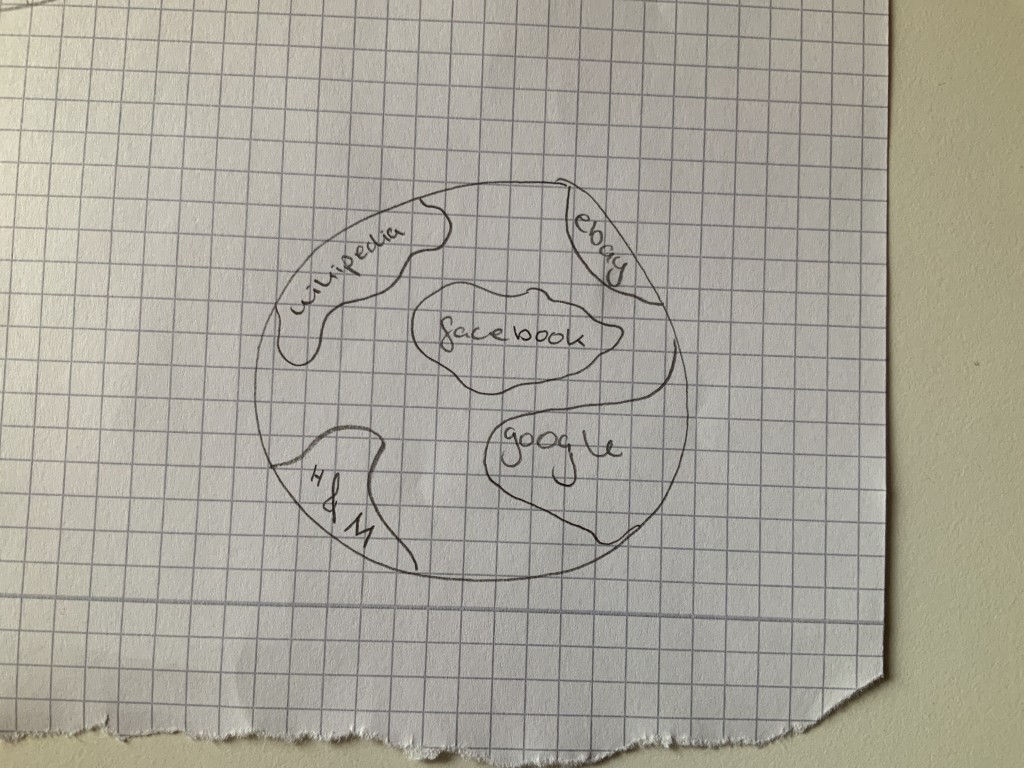 A 12 year old girl imagines the internet like a second, intangible, planet where Google, Wikipedia, Facebook, Ebay, or H&M are continents that one enters into.

"And on [the] Ebay [continent] there‘s a country for clothes, and ,trousers‘, for example, would be a federal state in that country."

Something that was unique about this interview was that she told me she had an email address but she never writes emails. She only has an email account to receive confirmation emails, for example when doing online shopping, or when registering to a service and needing to confirm one‘s address. This is interesting because it‘s an anti-spam measure that might become outdated with a generation that uses email less or not at all. 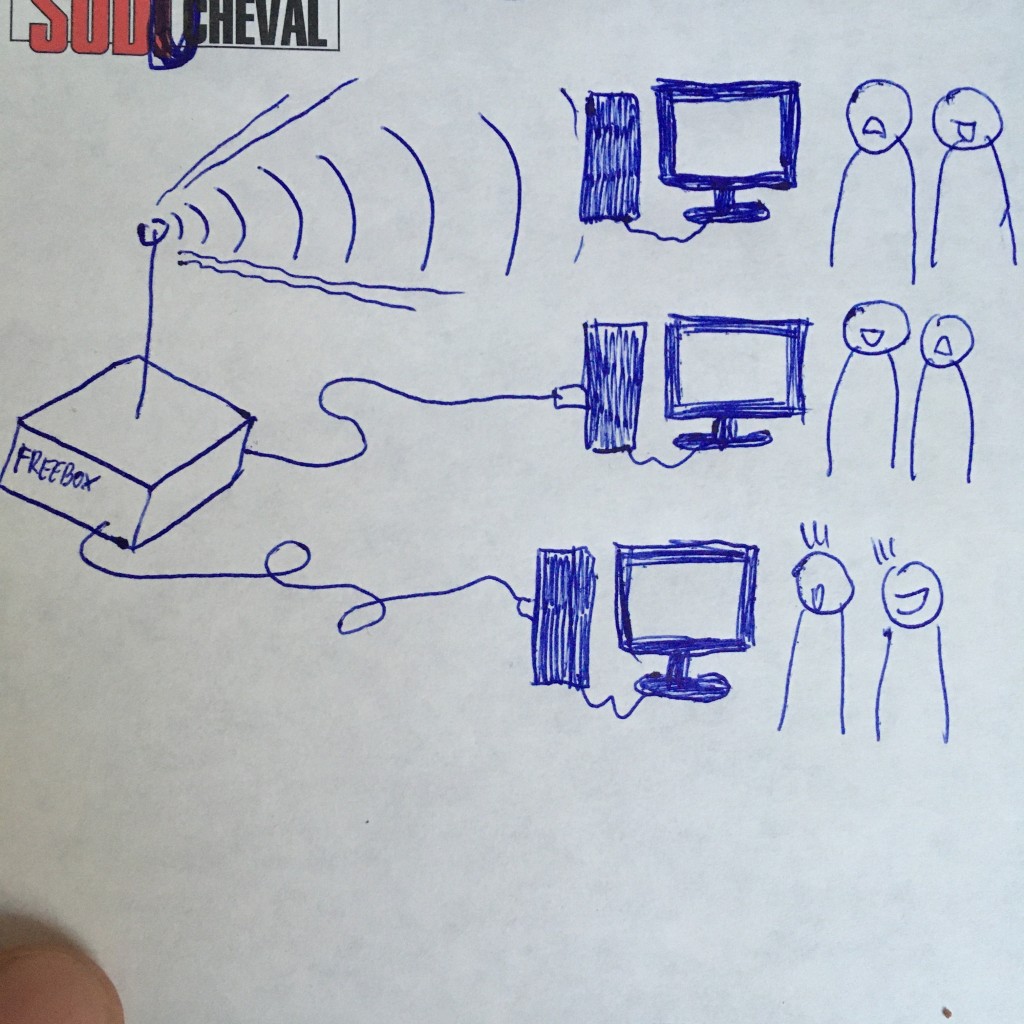 A 15 year old boy knew that his family‘s devices are connected to a home router (Freebox is a router from the French ISP Free) but lacked an imagination of the rest of the internet‘s functioning. When I asked him about what would be behind the router, on the other side, he said what‘s behind is like a black hole to him. However, he was the only interviewee who did actually draw cables, wifi waves, a router, and the local network. His drawing is even extremely precise, it just lacks the cable connecting the router to the rest of the internet. 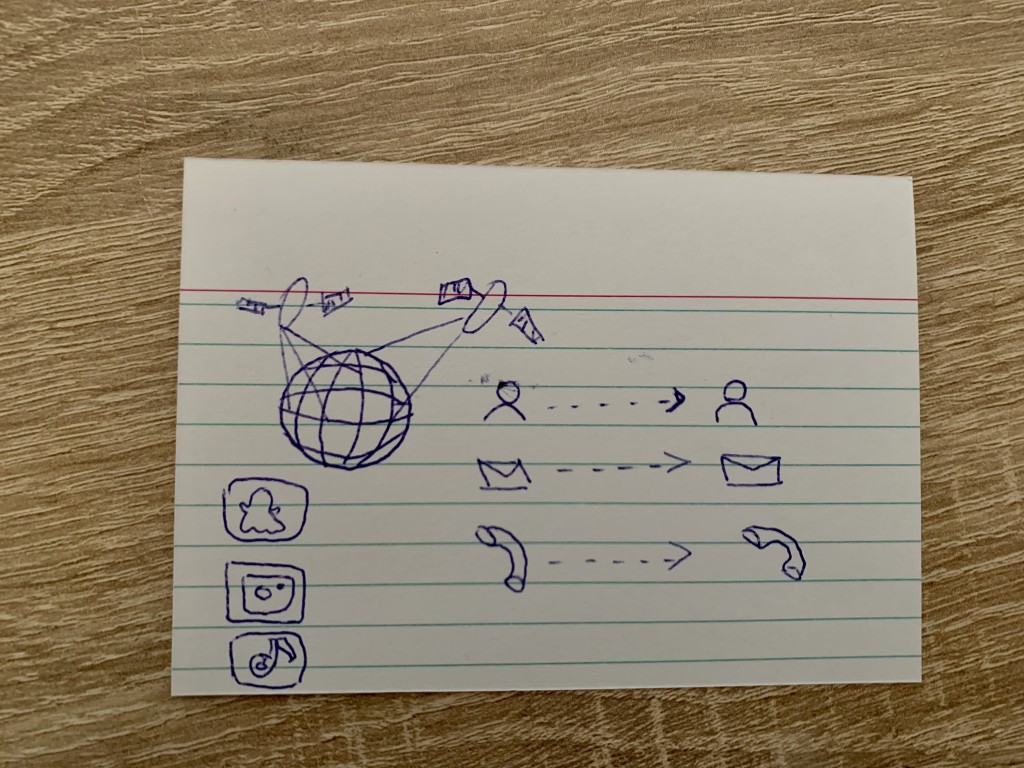 A 17 year old girl would explain the internet to an alien as follows:

This interviewee stated as the only one that the internet is huge. And while she also is the only one who drew the internet as actually having some kind of physical extension beyond her own home, she seems to believe that internet connectivity is based on satellite technology and wireless communication.

Imagine that a wise and friendly dragon could teach you one thing about the internet that you’ve always wanted to know. What would you ask the dragon to teach you about?

A 10 year old boy said he‘d like to know “how big are the servers behind all of this”. That‘s the only interview in which the word “server” came up.

A 12 year old girl said “I would ask how to earn money with the internet. I always wanted to know how this works, and where the money comes from.” I love the last part of her question!

The 15 year old boy for whom everything behind the home router is out of his event horizon would ask “How is it possible to be connected like we are? How does the internet work scientifically?”

A 17 year old girl said she‘d like “to learn how the darknet works, what hidden things are there? Is it possible to get spied on via the internet? Would it be technically possible to influence devices in a way that one can listen to secret or telecommanded devices?”

Lastly, I wanted to learn about what they find annoying, or problematic about the internet.

Imagine you could make the internet better for everyone. What would you do first?

Asked what she would change if she could, the 9 year old girl advocated for a global usage limit of the internet in order to protect the human brain. Also, she said, her parents spend way too much time on their phones and people should rather spend more time with their children.

Three of the interviewees agreed that they see way too many advertisements and two of them would like ads to disappear entirely from the web. The other one said that she doesn‘t want to see ads, but that ads are fine if she can at least click them away.

The 15 year old boy had different ambitions. He told me he would change:

"the age of access to the internet. More and more younger people access the internet ; especially with TikTok there is a recommendation algorithm that can influcence young people a lot. And influencing young people should be avoided but the internet does it too much. And that can be negative. If you don‘t yet have a critical spirit, and you watch certain videos you cannot yet moderate your stance. It can influence you a lot. There are so many things that have become indispensable and that happen on the internet and we have become dependent. What happens if one day it doesn‘t work anymore? If we connect more and more things to the net, that‘s not a good thing."

The internet - Oh, that’s what you mean!

On a sidenote, my first interview tentative was with an 8 year old girl from my family. I asked her if she uses the internet and she denied, so I abandoned interviewing her. Some days later, while talking to her, she proposed to look something up on Google, using her smartphone. I said: “Oh, so you are using the internet!” She replied: “Oh, that‘s what you‘re talking about?”

I think she knows the word “Google” and she knows that she can search for information with this Google thing. But it appeared that she doesn‘t know that the Google search engine is located somewhere else on internet and not on her smartphone. I concluded that for her, using the services on the smartphone is as “natural” as switching on a light in the house: we also don’t think about where the electricity comes from when we do that.

What can we learn from these few interviews?

Unsurprisingly, social media, streaming, entertainment, and instant messaging are the main activities kids undertake on the internet. They are completely at the mercy of advertisements in apps and on websites, not knowing how to get rid of them. They interact on a daily basis with algorithms that are unregulated and known to perpetuate discrimination and to create filter bubbles, without necessarily being aware of it. The kids I interviewed act as mere service users and seem to be mostly confined to specific apps or websites.

All of them perceived the internet as being something intangible. Only the older interviewees perceived that there must be some kind of physical expansion to it: the 17 year old girl by drawing a network of satellites around the globe, the 15 year old boy by drawing the local network in his home.